Unicorns are the new special creatures of The Sims 3 Pets. They are magical horses and have special powers… we’ll see them in details in this page.

Being a magical creature, the unicorn has superpowers (which can also be influenced by its traits) and when it walks, it is followed by some kind of stream of rainbows and twinkles. The horn of the animal changes its color depending on the animal's action: if it's starting a fire, it will be red. If it's blessing flora, it will be green and so on.

Their motives are the same of horses, but instead of the green bars, theirs are shining white. They can also have little ones, with horses too. Unicorns live longer than horses, they’re not immortal but their life span is 3 times a horse’s. You can customize unicorns as you do with horses, cats and dogs. You can go back to the Create a Pet screen at anytime and customize the mane.

When and where unicorns appear

How to adopt a unicorn

You can adopt a unicorn as you do with other stray pets, but will have to make friends with him first (in particular, you'll need to bestfriend at least 3 pets and have a 50LTR with the unicorn). Sims with the Loves the Outdoor trait befriend wild animals easier, and it should apply to unicorns too. 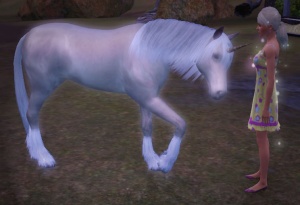 Unicorns have a magical energy, needed to cast spells. Each spell has a cost in energy, and if you don’t let enough time to your unicorn to recharge, he can get a negative moodlet for losing energy.