Vampires are by definition “Creatures of the Night” and, for this reason, their use suits best at nighttime. Vampires in The Sims 2 Nightlife were a copy of the old-fashioned literary and classic movie-based vampires, thus wearing classic clothes, stalking with their teeth covered by their arm and with the ability to turn into bats at will. The Sims 3 Late Night offers a more modern-based concept of the vampire, making it more up-to-date and more similar to modern movies and novels, and stripped of the old fashioned aura that characterized Nightlife vampires.

Base characteristics of new Vampires 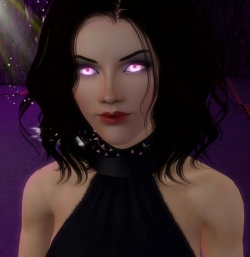 Identifying a Nosferatu-Sim among the crowd is not so difficult: they have a pale skin and glowing eyes. By the way, the pallor of their skin in Late Night is less pronounced than in The Sims 2 Nightlife. Their eyes are not crimson anymore, but a special eye lens has been applied OVER the standard eye iris, so that every player can have different vampires with different eye colors (still brighter though and, by this mean, Vampiric).

All you have to keep in mind is that, once your Sim has become a vampire, it will maintain his original eye color, only in a supernatural way, i.e. glowing.

If you’d like to change a vampire’s eye color, such as bloody red, an idea could be to use an external eye lens mod which overlaps the original eye iris. You will be able to edit your vampire's eye tone simply using the mirror and choosing the Edit Sim feature, then select from the CAS the eye lens, usually available under the Thematic Make up tab. It’s a simple procedure, in case you want your vampire to head back to normal state again later.

Other than glowing eyes, another vampire's characteristic is the show up of the bite mark in the neck of a newborn vampire, which should last for several days and then disappear (but it doesn’t apparently, it’s probably sort of a vampire mark). Unfailingly, there is also the show up of the typical sharp canine teeth (upper and lower set) and a light aura around the vampire skin, better seen at night (this almost invisible during daytime). In The Sims 3 Late Night vampires aren’t immortal: they live longer than any other normal or occult Sim but they will die of old age, sooner or later.

Relations with vampires are highlighted in pink on the relationship panel.

After Hunt, vampire's preys are highlighted with multiple pinkish circles:

Late Night vampires own supernatural powers they can use to hunt their preys or, more simply, to befriend other Sims more quickly.

Vampires' motives lower more slowly during nighttime (from 6pm till 6am) thanks to the Vampiric Vigor moodlet which also erases any negative mental effect (ex. a vampire cannot get stressed at night). In add, it provides them a really supernatural speed in skills learning (try it yourself!).

If a normal sim is near a stranger vampire, he will suffer the Hunted moodlet, making them feel unease.

Vampires’ motives have been dyed in purple and their Hunger motive bar has been replaced by the Thirst bar.

When a vampire learns a skill with the Vampiric Vigor moodlet (during the night), its progress bar will be surrounded by a flying bat (showing that the skill speed gain has been doubled).

Vampires can use several mental powers on other non-vampire Sims during nighttime, from 6pm to 6am (i.e. when affected by the Vampiric Vigor moodlet): 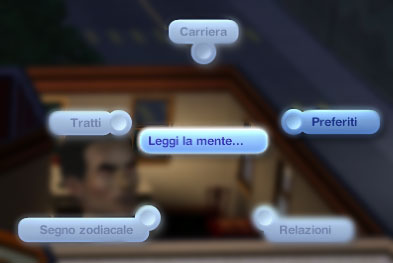 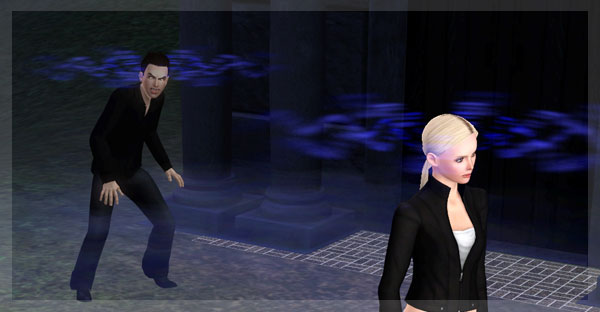 You can use these interactions by clicking on the targeted Sim. All mental powers can be used only at once and on one sim at a time: you have to wait a little before you can use the same mental power on the same Sim again.

Vampiric Powers haven't space limitations. A vampire can read someone else’s mind even if it’s on the opposite side of the town (you only have to look for him/her in the map).

Vampires run quicker than normal Sims and other occult Sims (they’re the fastest Sims at the moment) and while they’re running, a transparent blur will appear behind them to prove their speed.

Vampires are stronger than normal Sims during a fight (on same level skills), they also have a greater chance to win a fight (a special moodlet is given to a vampire which manages to defeat a mummy – a very hard battle, should the vampire not being skilled in Martial Arts!).

They’re also indefatigable, their endurance is infinite, allowing them to train with gym and martial arts-tools without suffering the fatigue. Their only potential fatigue is determined by a low energy bar (under 25%), in that case make them sleep. 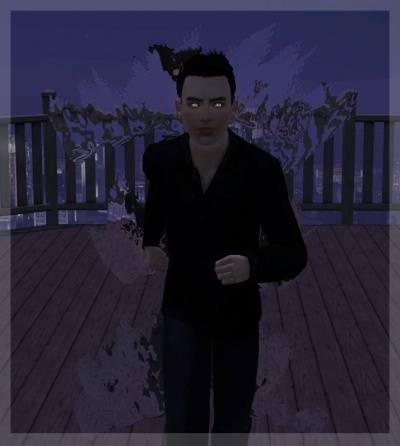 Vampire Sims do not need to fulfill the Hunger need, but must satiate their Thirst instead. There are many ways they can do that, some quicker or more convenient than others, but every method will do the same thing: fulfill the vampire’s thirst before him/her perishes.

The quickest and simplest way to fulfill the thirst is to drink the plasma juice, which can be taken from every fridge in the game (provided that a vampire is starting the interaction) for free.


You can find the juice under Snacks.
You can also loot the hospital and the supermarket for plasma juice, but be careful not to get caught.

Plasma Fruit
Another way is to plant and collect plasma fruits, much appreciated by vegetarian Sims which do not want to drink other Sims’ plasma.
Vegetarian Sims can also prepare a Plasma Fruit Soup, which can also be found for sale for everyone at the fast food truck.

As many of you may know, the classic direct way to fulfill a vampire’s thirst is to drink directly from the source, which means from other Sims. They must, however, be granted for permission from the victim before trying to bite.

The Vampire can use the interaction Hunt (by clicking on the ground) in order to find the more succulent prey. During the hunting process, the vampire uses the heat vision.

Should your vampire being a celebrity as well, be careful to prey your victims on isolated places, otherwise he will suffer the Disgraced moodlet.

A vampire feeding on a regular prey gets only the sated buff, while feeding on a Hunted Prey (recognizable by the special pinkish-circle icon in the relationship panel) will gain the Sanguine Snack buff, a nice +50 mood bonus.

A Vampire cannot bite parents and children (even if son/daughter are adult) and Occult Sims of course, only regular Sims (and only adult Sims, you cannot feed on pregnant Sims either). The victim-Sim of a bite will be weakened with a proper moodlet and cannot offer his bloo…er plasma again for a day at least. 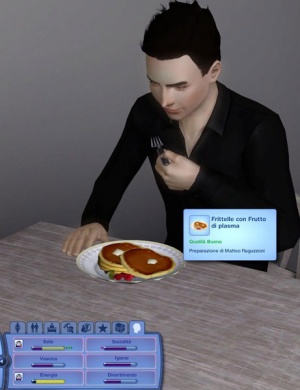 If your Sim is vegetarian, or if you just won’t give up regular food, there’s a more culinary way to satiate your vampires with no plasma spillages, a method accessible to everyone: the cooking skill! Who said a natural cook vampire cannot keep on cooking and yet being satisfied by its job? It’s true that vampires can eat regular food, but they won’t earn any privilege by doing it and they can get sick, nauseous and put on weight uselessly, but if the meal has been prepared with plasma fruits, the vampire thirst will be fulfilled anyway!

Here’s a practical example: are your Sims used to eat pancakes at morning? As long as the Sim that prepares the meal (not necessarily a vampire) has plasma fruits either in the inventory or in the fridge… there you go! Plasma Fruit Pancakes at your service! This is the only way to fulfill the thirst by eating normal food (any recipe with a fruit slot among its ingredients will do the thing, such as the Stu surprise).

Under the heavy sun

A Vampire under the Sun

Sun harms vampires! A vampire can walk under the sun for a few minutes, but after a while it will start to smoke and a pop-up will warn the player that vampires do NOT like being under the sun, and it’s better to search for an indoor place to hide.

If the vampire can’t find a place to hide in time, he will suffer a 2 days penalty in which all its powers will be annihilated.

By indoor place we mean:

A vampire that eats garlic, drinks something made with garlic or a Sim that has eaten garlic (and with the Garlic Breath moodlet) will feel sick and nauseous and can sometimes pass out.

Even Vampires need to sleep just like any other Sim (well, apart from mummies) and for this purpose a special bed has been introduced for them (different from Nightlife coffins). The better use of it is during daytime.


A vampire sleeping on the altar enters a state of deep meditation and, thanks to the 6.1 patch, they gather the "Slept like the Dead" moodlet. There aren’t even the sleeping “Zzz” during the meditative sleep.


The sleeping Zzz are replaced by V during the sleep.

Remember to always let your vampires sleep when they’re tired, because whenever their energy bar gets under 20%, they will be weakened and their powers inhibited as long as their energy bar remains low.

Turning into a Vampire

In order to become a Vampire, you must ask another Vampire to turn yourself: the Vampire must be (roughly, some traits changes this tuning) be at least a Friend, otherwise it will reject.

A Vampire Sim can also offer a Sim to turn into a Vampire.

A Sim who has been bitten from a Vampire wonders if the bite has been made from a mosquito or a spider. The Vampirization process is not immediate and requires 48 hours to complete.

The bite itches ever so slightly. It's easy enough to resist the urge to scratch though.
The heat! It's as if my blood is on fire, literally boiling within my veins. What have I gotten myself into?
I feel as if a part of me has died, yet every other fiber of my being is raging with vitality. I crave something, yet I don't know what. It's...like a thirst...
Remember to ask to be turned into vampires away from other Sims (other vampires do not bother) otherwise the vampire will decline to bite you in front of an audience (just head to an empty room, like the toilet or a garage and ask again). 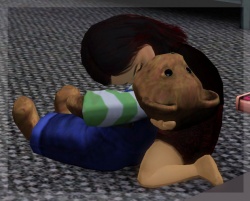 Vampirism is genetic and such transmissible to the children if both parents are vampires.
If only one of the parents is a vampire there’s 50% chance that the baby will be a vampire, otherwise it will be normal.
All the motives will be standard until the baby becomes a teenage (no thirst for children, but hunger instead), but still will keep the pale skin and glowing eyes.
Teenage Vampires still cannot turn other Sims into vampires but will be able to do that once they reach young adult stage.

Vampire Babies will occasionally bite their teddies while playing. The only power little vampires still own is the double speed gain for skill advancement during nighttime.

Vampires can loot the hospital and the grocery store for plasma juice. They can steal up to three plasma packs but be careful not to get caught by police!

There are very funny popup messages during loots.

Vampires can buy the cure for Vampirism (the well-known Vamporocillin) at the Science Lab. It will cost 3.000§.

Interaction at the Lab

Bring Vampires to other Towns

In order to bring vampires to other towns, such as Sunset Valley or Riverview you must do the following: 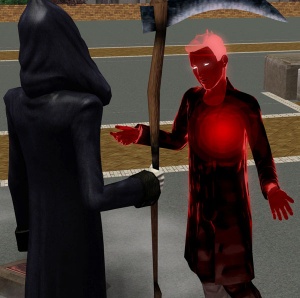